Variable speed drives are among the main solutions to increase energy efficiency of facilities, because a large part of the electricity produced in the world is used to circulate fluids, liquids and gases of all kinds as pumps, fans and compressors.

In industrial processes and large buildings, the 72% of electricity is consumed by motors, which , the 63% Pumps used in, fans and compressors. So we will describe lightly how it would be the operation of them but focusing only on the pumps so that we do not expand too much in this article and quantify the energy savings that speed control can generate,es.

As I focus on Pumps centrifugal pump, as it is the most widespread type of pump, mainly in the water sector.

The operating principle involves driving an impeller (usually an induction motor) to transfer mechanical energy to a fluid, which is converted into potential energy (pressure represented by) and kinetic energy (Flow represented by).These engines operate at a constant speed but are perfectly prepared to work at variable speed if fed variable speed drives.

The mission of the pump is to deliver a certain amount of fluid in a given time at a given pressure. The most important parameters are the flow rate Q and hand-meter height H.

We see the curves of pump operation: 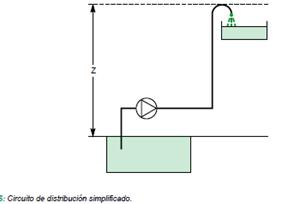 The dark rectangle represent the useful power delivered by the pump.

Once you know roughly how a pump see what is done to vary the flow rate of the same fixed speed. Apply various methods:

1Using º valves downstream of the pump.

2No use of bypass circuit (Bypass)

4No pumps in parallel

Describe only the most usual , The use of valves downstream of the pump.

This produces an increase in pressure at the outlet of the pump and power loss in the fluid.

In Figure , Operating point A corresponds to the flow Qn (maximum flow). Point B to reduced flow Qr. The optimal operating point for this flow circuit is C. Being the shaded area power loss with this way of working. 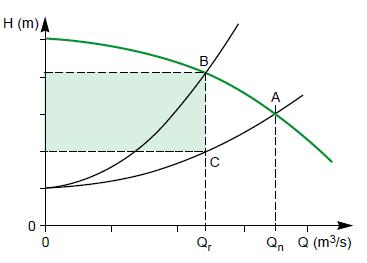 This one rules bombs although approximate, are satisfied in a wide range of speed variation.

Considering a bomb itself( regardless of the height of the water column) to a rotational speed N, different nominal speed Nn

The flow rate Q is proportional to (N / Nn)

The height gauge (TDH) is proportional to (N / Nn)2

Power is proportional to (N / Nn)3

Thus from the nominal speed curve, la THD (Q) another different speed can be traced, point-to-point, placing homologous points in a parabola as in Figure. 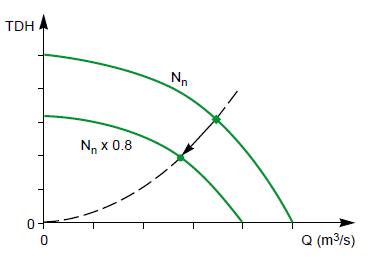 Then returning to the graph had before the operation of the pump and applying the change in velocity would obtain the following figure: 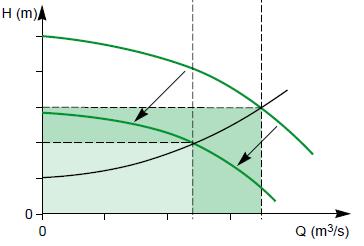 We see that the useful power supplied by the pump is proportional to the shaded rectangular areas: A significant power reduction is demonstrated in the configuration of the speed variation.

Thus varying the rotation speed allows the pump always use your highest level of efficiency. The more you reduce speed greater power reduction. The drive is going to provide the required flow at all times adjusting to getting adequate power we save on total system operation.

This is the most important, but do not forget also that the drives we provide other advantages as:

If you want to know an estimate of the energy savings that can be achieved using variable speed drives rather than using traditional techniques, in the network are different programs that can help manufacturers know this type of savings, I put the link of one of them in case you want to download it… it's free.